Is The Disney Font Copyrighted? 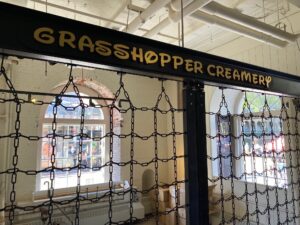 I have been in Boston the past week, and while visiting Faneuil Hall, my family noticed a storefront sign that felt familiar, shown at right.

Faneuil Hall is a nearly three-hundred-year-old building that a rich merchant, Peter Faneuil, had built to house various merchants.  This “Cradle of Liberty” was a meeting location for patriots in the years before the Revolutionary War.  Atop the Faneuil Hall is/was a golden weathervane in the shape of a grasshopper, apparently a good luck imitation of the grasshopper weathervane above the Royal Exchange in London.

Which brings us to the storefront name, Grasshopper Creamery.  The restaurant itself is gone now; I assume this place sold ice cream and fudge or something similar to tourists like me.  I have no idea why it is gone, but I suspect it was not because of intellectual property infringement.

The storefront sign font clearly is the Disney font.  Or a Disney font.  My wife immediately said, “hey, that looks like Disney’s lettering” when she saw the sign.  And it does.  The A, S, and E in the word signs look very similar.

So, is this trademark infringement?   Probably not.  Without doing something more, trademark rights do not attach to a font set, and they do not attach to particular letters such that the use of a similar font on other letters would constitute trademark infringement.  In other words, Disney’s use of the above trademark for ice cream and other food services would not create such strong rights that it could leverage them against a company with an entirely different name like GRASSHOPPER.

But, is it copyright infringement?  This question is tougher to answer.  To be clear, using a font for ten letters (WALT DISNEY) does not create ownership rights in a full set of 26 letters scripted in that font.  In fact, using a font for ten letters as a name (like WALT DISNEY) does not even create copyright rights in that name, because copyright protection cannot substitute in short phrases in names.

Then is there any infringement, any protection at all?  Potentially.  Typographers do protect fonts with copyright.  When an artist develops a new font, he or she can protect it and can register it for official protection with the US Copyright Office.  This gives the artist strong rights and makes it much easier to license to typesetters, printers, artists, and software companies.  Disney may have done this with its font.  If so, it alone would have the right to use those protected letters, and it alone would have the right to license the use of those letters.  In some cases, fair use can allow permissive use, but those circumstances are specialized, limited, and almost certainly would not cover storefront signage for a commercial enterprise.  I am not certain as to whether Disney did copyright its font set, so this question remains unanswered in my book.