In honor of the Rubik’s Cube craze that has recently hit the Galvani household, we decided to take a closer look at how this iconic toy was created and what type of intellectual property protection it has enjoyed over the years. 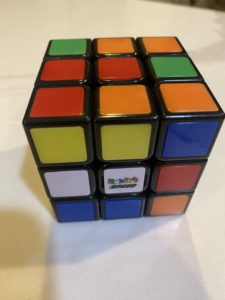 Erno Rubik was a Hungarian design teacher who loved puzzles.  He set about creating a toy based upon geometry in hopes of helping his students learn about three-dimensional objects.  Rubik invented a toy with 26 tiny cubes in six different colors joined together into one big cube that he called the “Magic Cube” in 1974 and by 1980, it was being sold in toy stores world-wide under the name “Rubik’s Cube.”  This famous puzzle toy has been the subject of various infringement suits over the last forty years.

Rubik received patent protection for the Rubik’s Cube toy in Hungary in 1977.  He obtained little patent protection world-wide, however, only receiving patents in Belgium and the United States.  Rubik was granted a U.S patent on March 29, 1983 for a “Spatial Logical Toy.”  Rubik granted the toy company Ideal Toys a license to sell the Rubik’s Cube toy.  Larry D. Nichols had a 1972 patent for a “2x2x2 Puzzle with Pieces Rotatable in Groups,” which was for a 2×2 puzzle held together with magnets.  He sued Ideal Toys for patent infringement.  After losing this infringement case in 1984, Ideal Toys appealed and, in 1986, a court determined that the original Rubik’s Cube toy did not violate the Nichols patent, but a pocket-sized version of the Rubik’s Cube did.

The U.S. patent for the Rubik’s Cube expired in 2000, but Seven Towns, the exclusive licensee of Rubik’s Cube’s IP rights at the time, had a creative strategy for finding protection in another way.  Seven Towns attempted to register trademark – or trade dress – protection in the shape of a Rubik’s Cube toy to prevent knock-off versions.  It registered the cube shape with the European Union Intellectual Property Office in 1999.  Trade dress and trademark protection can be extremely valuable since they can potentially continue forever in spite of the expiration of related patents covering the underlying product.  The EUIPO granted the trademark, and Seven Towns enjoyed its protection until it was challenged in 2006 by another toy company called Simba Toys.  After a 10-year battle, Simba Toys won its argument that the cube’s shape contained a technical solution that should be protected by a patent, not a trademark.  The EU canceled the Rubik’s Cube trademark.

These days, you can find plenty of knock-off puzzles, but most major retailers continue to sell the original Rubik’s Cube and related puzzle products under the Rubik’s name which are marketed as the “World’s No. 1 Puzzle.”