A few weekends ago I competed at Ironman 70.3 Oceanside in California. Oceanside has some restaurants I’ve not seen anywhere else before, in the country or even in California. One of those was a place called Angelo’s, which served everything from burgers to gyros to Mexican. It was decent enough, though probably not the best race food. What struck us was the sign out front. The friend I traveled with is not a lawyer, but he is in sales, so he may be more sensitive to logos than the average bear. We both noticed the sign immediately: 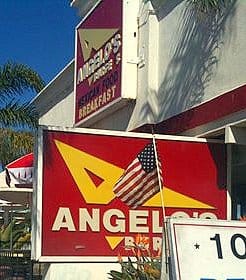 The color scheme and prominent shape of the stylized “A” instantly conjured up the iconic In-N-Out Burger sign.  You know the one:

I have no idea how there has not been a lawsuit over this sign. In-N-Out hasn’t shied away from suing others for trademark infringement in the past.  The Angelo’s logo above is interesting because it appears only on the signs that face the road – the signs on the top sides of the restaurant had upstanding As (think Alvin and the Chipmunks “A”).  The road signs are in a place where motorists will catch only a quick glimpse of it from afar or as they pass by.  And with that quick glimpse, the color combination, the angled A, and the writing superimposed through the middle of the A could easily confuse the customer.  It did us, even after we knew we were going to Angelo’s.

Next post: the other incredibly similar trademark infringement we saw during this triathlon trip: ROLA v. POLAR.