THE Ohio State University and the Clothing Trademark Problem

Earlier this month, the Trademark Office refused an application to register a trademark for THE in 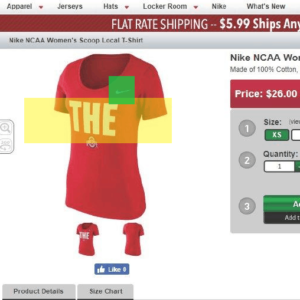 The trademark application was filed by the Ohio State University. Some people have inaccurately seen this as grab by OSU to lock down all uses of the word THE, or that it was refused because OSU can’t be allowed to take the word THE out of the public domain. Both of these assumptions are wrong, however.

Just about any word can be protected as a trademark, but it has to be used the right way, and with the right product or service.

The second issue for OSU’s trademark application is one frequently seen in trademark applications for clothing. The application was refused because THE was only being used in an ornamental sense. This happens all the time with clothing because applicants think that putting a trademark in big letters on the front of the shirt shows that the trademark is being used. Just the opposite, though. The Trademark Office consistently rejects such proof of use.  In the photo above, words appearing in big font in the yellow rectangle will almost always get rejected.  Words or logos in the small green square will usually (though not always) get approved.  I’m surprised that this attorney, who appears to specialize in trademarks and IP law, didn’t know that, or didn’t file the application some other way to avoid the rejection; though perhaps there are other reasons the filing was made despite this. OSU will now need to provide proof that it is using THE in some other way, such as on a price tag or a label.

This case beautifully exemplifies why clothing trademarks are so delicate. I see more abandoned clothing trademark applications that any other kind, and I believe it is because business owners file them on their own, thinking that putting a name on the front of a t-shirt s sufficient to establish trademark rights. It isn’t; the law just does not reflect the public perception of a name or logo on a t-shirt. If you are considering filing a trademark application for clothing yourself, please don’t – contact a local trademark attorney or contact Tom here.